The past seven years have seen a concerted push to build 11 hydropower dams on the Mekong mainstream. Of these, seven are located in Laos, two on the Thai-Lao border and two in Cambodia.

In 2010, the Xayaburi Hydropower Project was the first project to undergo the Prior Consultation process, under the Procedures for Notification, Prior Consultation and Agreement (PNPCA) pursuant to the 1995 Mekong Agreement, which is signed by the four riparian countries. The Xayaburi dam’s Prior Consultation process was conducted amidst a public outcry from stakeholders across the region, particularly with respect to the way the process was summarily rushed through without a transboundary impact assessment. After the six-month process, the Joint Committee of the four countries could not reach an agreement on the project and proposed to undertake further negotiations at the MRC Council level, in accordance with articles 34 and 35 of the Mekong Agreement.

Although the Council recommended undertaking additional assessment, Thailand’s EGAT (Electricity Generating Authority of Thailand) signed a power purchase agreement, which paved the way for construction. The project was completed and official operations commenced in October 2019, despite the lack of a transboundary impact assessment, which is yet to be undertaken.

The Mekong mainstream dams are being developed by investors from various countries, including China, Thailand, Vietnam, and Malaysia. Xayaburi dam was financed by various Thai commercial banks.

The transboundary environmental impacts of Xayaburi Hydropower Project, which started producing power in July 2019, are clear. There has been dramatic fluctuations in the Mekong in Chiang Khan district, Loei Province, which is downstream of the Xayaburi dam. The changes in water flows and levels are not natural, and have negatively impacted the Mekong’s ecology, particularly the migration of fish in the Mekong. In addition, plants along the river and its rapids have died from heat. Towards end of 2019, the colour of the river turned blue as a result of reduced sediment load.

All these have subjected the Xayaburi Hydropower Project to serious questions about its extensive environmental and social impacts.

On 7 April, the Prior Consultation process for the Luang Prabang dam was scheduled for completion. The Luang Prabang dam has an installed capacity of 1,420MW and the lead developer is Petro Vietnam. Electricity from the dam is slated for export to Thailand and/or Vietnam. In Thailand, three ‘public hearings’ were held as part of the Prior Consultation process: first one on 24 December 2019 in Nakhon Phanom; second one on 28 January 2020 in Amnaj Charoen; and the third on 25 February 2020 in Loei province. On 25 March, the Thai National Mekong Committee held a meeting to determine Thailand’s position on the project.

As stakeholders who would be affected by the Luang Prabang dam and other dams on the Mekong mainstream, the Thai Mekong People’s Network from Eight Provinces have the following demands and recommendations to the Thai government.

1.The Thai government should stop its support and firmly assert its stand against the construction of the Luang Prabang dam and other dams on the Mekong mainstream. Electricity from the Luang Prabang dam and other Mekong mainstream dams are not needed to serve the demand in Thailand. According to EGAT’s website, the total installed capacity in Thailand comes to 45,575 megawatts whereas the peak demand (13 February) is 27,112 megawatts. This leaves Thailand with a staggering power reserve margin of 30%. Given the immense impacts on the ecology, the community, the society and the whole nation of Thailand and other countries in the Mekong Basin, investments in such projects are not worth the cost.

2. The Electricity Generating Authority of Thailand (EGAT) should not buy power from the Luang Prabang dam because Thailand is now facing an electricity glut. This is particularly true in light of the current economic slump due to the spread of coronavirus.In addition, EGAT should remind itself that as the state utility of Thailand it is tasked with procuring sufficient supply to meet domestic demand rather than serving as a power broker to procure power for the whole region.

EGAT should not buy power from the Luang Prabang dam and other Mekong mainstream dams and should manage its power procurement to ensure the availability of proper alternative sources in the country pursuant to EGAT’s policy to promote domestic employment and to advance the utilization of new technologies to bring about genuinely clean and sustainable energy.

3. The Prior Consultation process is flawed and must be reformed. Issues with the process range from insufficient disclosure and a lack of public participation to the joint decision-making process among governments of the four countries being overridden by a unilateral decision to proceed the project. This cannot count as a collective decision-making process for shared natural resources. The Mekong should adhere to shared international governance principles in line with best practice regimes for regulating the use of other international rivers.

Until now, it is clear that the PNPCA has simply been used as a tool to justify the implementation of projects. It is a ploy to claim compliance with a regional agreement among riparian countries in the Mekong Basin. The six-month PNPCA process has simply been used by a country to unilaterally invoke its right to further develop the projects.

The Network therefore proposes that the Luang Prabang dam be the last project to undergo the Prior Consultation process until the Mekong Agreement 1995 is subject to review and amendment to revise the PNPCA.

4. The transboundary impacts from existing dams in the upper reaches of the Mekong in China and the Laos’ Xayaburi Hydropower Project are becoming more serious. The impacts can be felt by the people in Thailand who live by the Mekong and the people in downstream countries. Yet, there are few measures to meaningfully address the problems, to offer remedy, and no one has been held accountable for the impacts. Although it is claimed the Xayaburi Hydropower Project is equipped with mechanisms to mitigate impacts on the fishery and to ensure the flow of sediments, their effectiveness have yet to be proven.  On the contrary, due to the changes in sediment and water flows, extensive impacts are being observed on the fishery and the ecology of the Mekong and the basin’s people.

The Network therefore demands the Thai government and EGAT disclose all relevant information and to conduct a study of the emerging impacts as well as to remedy the damages to ensure the balance and sustainability of the Mekong’s ecology.

Last but not least, we, the Thai Mekong People’s Network from Eight Provinces, demand the governments of the four member countries of the Mekong River Commission (MRC) including Thailand, Laos, Cambodia and Vietnam adhere to good governance and best practice principles concerning the management of international rivers. Any decision-making process concerning the Luang Prabang dam has to be made to serve the public interest including the 60 million people whose livelihoods depend on the Mekong.We call on all actors to ensure that the Xayaburi Hydropower Project is the last dam to be developed in the Mekong and the government, the project developers, banks and all investors to immediately develop and implement measures to identify, avoid and mitigate the transboundary impacts of existing and proposed dams on the Mekong mainstream. 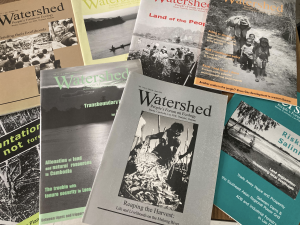